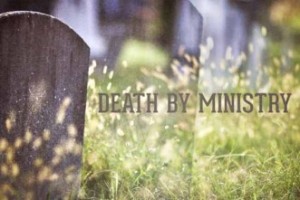 By Eugene Cho, reprinted from www.churchleaders.com

Years ago, I spent several hours per week doing research (and meeting with other pastors) about pastoral health and vitality for my denomination.

I chose to spend some time doing that for selfish reasons. I was and am still learning how to take better care of myself in ministry (as evidenced by the scary picture above) – while completely acknowledging that sometimes, it’s not supposed to feel right. We all know that work…well…is supposed to be laborious. And those in ministry know that ministry in itself is difficult. There’s no way to get around it, but…

What I learned was pretty shocking and heartbreaking, but one of the conclusions I came to was that as ministry leaders, pastors, and other pursuers of God’s work, it helps to understand some of the challenges ahead and to be proactive rather than reactive.

Recently, I posted Part I of this post entitled, Why Is Being a Pastor So Unhealthy. The reasons are complex, and I’ll acknowledge that when one looks for “doom and gloom,” you’ll find some discouraging things. I can focus an entry purely on the joys and blessings of pastoral ministry and feel confident I can write a compelling piece. But these statistics (and stories that many of us are aware of) and our personal stories are hard to ignore.

Here’s a summary of what I learned and shared:

There are varying reports from different sources, but I believe most will agree that the ministerial profession (life as pastors) is now considered one of the most dangerous or unhealthiest professions. It’s usually rated last or second to last. Read this from a local Northwest minister, Mark, on a comment on an earlier post:

“At the first church I served, we had an insurance agent who was a member of the congregation. When I went to see him about some auto insurance needs, he said ‘Hey, wanna see something that will scare the crap out of you?’…He pulled out a form that had various professions rated for their risk of giving life insurance policies to…Anyway, to make a lengthening story shorter, he showed me that clergy members were in the same category as Deep Sea Welders and Loggers as the second highest risk group to give life insurance policies to. We were behind crab fishermen but ahead of munitions workers.

It was a little disturbing to know that statistically I was gonna die due to my profession before someone who builds explosives. This was back in 1994; the statistics may be better (or worse) now.”

If you don’t believe the above comment, read some of these statistics:

Forty-eight percent of them think their work is hazardous to their family’s well being. Another 45.5% will experience burnout or depression that will make them leave their jobs. And 70% say their self-esteem is lower now than when they started their position. They have the 2nd highest divorce rate among professions. Who are they? They are pastors. Here are some more overwhelming statistics from this article.

Feeling dizzy? Take a breath. Here are some more statistics:

While I love being a pastor and even more, being called to be a pastor, I want folks to know how incredibly difficult it is at times to handle the complexities and stress of being a minister.

Finally, at the age of 39, I feel more at peace at how to create boundaries, love my church, better care for my wife and children, support my fellow staff, handle criticism, etc. but there are times, I feel clueless and overwhelmed. I’ve been having occasional visitors from a blog started by and for pastors’ wives [couldn’t find one for pastors’ husbands]. Some of their comments have been difficult to read because they hit so close to home. I will not post a link to their blog here, but here are two comments:

“Oh, and the financial part is tough. We live on poverty level. I don’t know how we are going to pay all the bills sometimes, much less buy groceries. The Lord always comes through, though, and on a really tough week, someone in the church will anonymously give us a gift. We have no in between at our church. It’s either people trying to help us out (it’s all there what we make each week – in black and white), or it’s people that have this attitude – ‘Pastors are supposed to suffer and sacrifice. It’s part of the job.’ Has anyone else noticed that mentality? I don’t know where it comes from, and it is one of my biggest pet peeves. Pastors aren’t supposed to drive nice cars, have nice houses, or buy new clothes. And we are always supposed to be worried about making ends meet – I wonder if it is just half of my church that thinks that way.”

“Today my son approached my husband and randomly said, ‘I guess you’re going back to church now.’ And he wasn’t going anywhere! During seminary, he would walk around the house saying, ‘Bye bye, Daddy. Bye bye, daddy!’ So sad, but very true. It’s definitely a calling, isn’t it? I told my husband the other day: ‘In my classes that I took to prepare me to be a minister’s wife, they told me over and over again, ‘it is the loneliest job in the world,’ but I never realized it until we were in the role…’”

While I feel solid support from my staff, my elder board, and the church as a whole, I know that many of my peers do not feel this way.

Simply, pastors are often underpaid, underappreciated, and at times, undermined.

There is strain on their marriages and families. Two other incredibly real factors that add complexities to the ministerial calling are: 1) the cultural complexity and dynamic of the 21st century and 2) the nebulous but real nature of the spiritual realm and battle. The reality is that being a pastor is not just merely a job nor should it be one. Ministry is a calling. It’s both amazing and incredibly difficult. While it isn’t my desire to overdramatize the significance of ministry, I do believe that the Evil One seeks to impede and harm the work that is to take place through ministers and pastors.

As for the “cultural complexity of the 21st century,” I think this quote captures my sentiment:

“My viewpoint tends to be more organizational, so my take on being a pastor is that it is an impossible job. Here you are asked to be the lead preacher and teacher, available for counseling sessions, leading a staff of people that can span such responsibilities as missions and janitorial, serving as the public face for your organization in the community, networking with other leaders at Christian conferences and denominational gatherings. That’s a lot of hats!…Let’s finally consider the financial issues. I don’t believe pastors are paid very well, so that’s obviously a downer. And if you are paid well, and sometimes even if you aren’t, that has its own issues, for congregants can quite easily feel they own you, since they’re paying your way. What other organization is the person at top in such an awkward financial relationship with his or her co-workers and clients?” [h/t Lee H]

My point is very simple:

Please care, pray, and love your pastors (and church staff) in your churches.

Seriously, give them a nice pay raise, more time off, regular opportunities to get away for even a day retreat to pray, buy them some dinner certificates, honor their spouses, love their children, pray for them, and regularly share your appreciation and affirmation.

Now, I know that this can easily be intended to perpetuate the victim language or mentality, but it’s a two-way street. Churches must seek to honor and care for their pastors and staff and build healthy structures to ensure such care. Similarly, pastors and their families must make choices to be holistically healthy! We must rest, Sabbath, enjoy God, love the Scriptures not simply for the sake of sermon preparations, be in deep friendships and community, exercise, work on our jump shot, continue to be a reader and learner, love and honor our spouses, nurture our children, laugh and have fun, eat healthy and drink good refreshments [use your imagination here], examine and repent of any possible addictions, and [add your contribution here].

We need to lean on God, stop our self-sufficiency, and repent of the idolatry to please all those around us. Easier said than done, but it needs to begin somewhere. Why not now?

Despite the intense nature of pastoral ministry, it is also immensely fulfilling. Huh? It makes total sense to me. According to a recent survey, the top five professions are clergy, physical therapists, firefighters, education administrators, and painters/sculptors:

“They look at their occupation as a calling,” Carroll said. “A pastor does get called on to enter into some of the deepest moments of a person’s life, celebrating a birth and sitting with people at times of illness or death. There’s a lot of fulfillment.” [read the entire article]

So while pastoral ministry is at times exhausting, draining, depressing, and overwhelming, it’s also meaningful and fulfilling.

May God grant you grace, courage, and strength.

Eugene Cho is the co-founder (with his wife) and executive director of One Day’s Wages — “a movement of People, Stories, and Actions to alleviate extreme global poverty.” He is also the founding and lead pastor of Quest Church and the founder and executive director of Q Cafe — a non-profit community cafe and music venue in Seattle. Follow Eugene on Twitter or his personal blog.