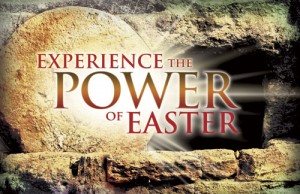 The Power Of Easter Is The Greatest Power In The Universe

See video of this message by clicking here.

Listen to the audio message by clicking here.

Matthew 16:21-25  “From that time on, Jesus began to explain to his disciples that he must go to Jerusalem and suffer many things at the hands of the elders, chief priests and teachers of the law, and that he must be killed and on the third day be raised to life.

Peter took him aside and began to rebuke him. “Never, Lord!” he said. “This shall never happen to you!”

“Jesus turned and said to Peter, “Get behind me, Satan! You are a stumbling block to me; you do not have in mind the things of God but the things of men.” Then Jesus said to his disciples, “If anyone would come after me, he must deny himself and take up his cross and follow me. For whoever wants to save his life will lose it, but whoever loses his life for me will find it.”

Nothing in the universe has to the power to raise someone from death to life.

Jesus had bled out.

He was dead for three days.

The Bible says His spirit had left his body.

No one has ever had the power to bring someone back from this kind of death.

The Frankenstein story written by Mary Shelley took us into a lab with incredible power being generated by a lightning storm as a means of reanimation.

The modern Zombie books and movies talk about the undead, but who are never really alive again.

If someone is only dead for a few minutes they can sometimes be resuscitated with CPR, or Defibrillators can be engaged, but when there is no oxygen to the brain for 7 or 8 minutes, its over. The brain has already begun to die.

But Jesus didn’t go through a mock death, or a temporary death, the body of Christ was stone cold dead for three days, locked in a stone tomb with a massive boulder rolled over the door.

WHAT HAPPENED THAT MADE IT POSSIBLE FOR HIM TO COME BACK TO LIFE.

Acts 1:3 NJB “He showed Himself alive to them after His Passion by many demonstrations: for forty days He continued to appear to them and tell them about the kingdom of God.”

Rom 1:4 LB “By being raised from the dead He proved He was the mighty Son of God, with the nature of God Himself.”

Eph. 1:19-20 LB “I pray that you will begin to understand how incredibly great His power is to help those who believe Him.  It is that same mighty power that raised Christ from the dead.”

God sent Jesus to redeem us from the fall shouting “Paid in Full!”

Rom 6:23 NLT  “For the wages of sin is death, but the free gift of God is eternal life through Christ Jesus our Lord.”

Heb 1:3 NLT  “The Son reflects God’s own glory, and everything about him represents God exactly. He sustains the universe by the mighty power of his command. After he died to cleanse us from the stain of sin, he sat down in the place of honor at the right hand of the majestic God of heaven.”

Rom 6:6 NCV “Our old life died with Christ on the cross so that our sinful selves would have no power over us and we’d no longer be slaves to sin.”

2 Cor 5:19 NLT “God was in Christ, reconciling the world to Himself, no longer counting people’s sins against them.  This is the wonderful message He has given us to tell others.”

Jn 20:1-7 NLT ““Early Sunday morning, while it was still dark, Mary Magdalene came to the tomb and found that the stone had been rolled away from the entrance. She ran and found Simon Peter and the other disciple, the one whom Jesus loved. She said, ‘They have taken the Lord’s body out of the tomb, and I don’t know where they have put him!’ Peter and the other disciple ran to the tomb to see. The other disciple outran Peter and got there first. He stooped and looked in and saw the linen cloth lying there, but he didn’t go in.Then Simon Peter arrived and went inside. He also noticed the linen wrappings lying there, while the cloth that had covered Jesus’ head was folded up and lying to the side.”

The story of the  folded napkin:

Why did Jesus fold the linen burial cloth after His resurrection? The Gospel of John (20:7) tells us that the napkin, which was placed over the face of Jesus, was not just thrown aside like the grave clothes. The Bible takes an entire verse to tell us that the napkin was neatly folded, and was placed separate from the grave clothes.
Was that important? Absolutely!
Is it really significant? Yes!
In order to understand the significance of the folded napkin, you have to understand a little bit about Hebrew tradition of that day. The folded napkin had to do with the Master and Servant, and every Jewish boy knew this tradition.
When the servant set the dinner table for the master, he made sure that it was exactly the way the master wanted it.
The table was furnished perfectly, and then the servant would wait, just out of sight, until the master had finished eating, and the servant would not dare touch that table, until the master was finished. Now, if the master were done eating, he would rise from the table, wipe his fingers, his mouth, and clean his beard, and would wad up that napkin and toss it onto the table.
The servant would then know to clear the table. For in those days, the wadded napkin meant, ‘I’m done’.
But if the master got up from the table, and folded his napkin, and laid it beside his plate, the servant would not dare touch the table, because……….. The folded napkin meant,
‘I’m coming back!’
HALLELUJAH!  HE’S COMING BACK!!!