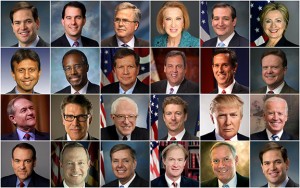 I am resisting the urge to wade into all the Iowa tumult as I am so often amazed, and disgusted, by the division politics breeds between Christians who say they believe in the teachings and values of the same Bible I hold dear.

But then some of these same Christians are probably amazed and disgusted with my politics as well. Welcome to the USA.

Having lived through 12 Presidents, and many more state and local elections, I no longer drink the Kool aide of anyone’s campaign promises.

I evaluate what the candidates are saying in light of where they have come from, because history is often a great predictor of the future.

I have been a keen observer of politics since John F. Kennedy. When I was younger I campaigned for several politicians, both state and national. Even as a child, my father, who was active politically, had me go from house to house handing out campaign pins for who he hoped would be the next Governor of Louisiana. The candidate lost, but it had a life-long influence on me. It made me care about elections. Every election is important.

If only I could be king for a day. Actually that is a pretty scary thought. No thanks. I prefer to stay in my lane.

There were other political involvements along the way, but most notably, after campaigning vigorously for a presidential candidate in 1976, Cathy and I had the honor of being invited to the Presidential Inauguration of 1977. We stood in the cold and snow in Washington DC and witnessed the amazing transfer of power that is our Democratic Republic. No blood was shed as in other countries. It was a “bucket-list” experience for me.

Our nation has now passed that peaceful baton through 44 Presidential administrations, and our noble American ideals as a “city upon a hill” continue to survive.

I can’t say I believe they still thrive, but they do still survive.

As a pastor, father, and grandfather, I have a huge love and concern for my country and for the future we are handing the next generations. The domino affect ripples down through time. I think every true Christ-follower should be very concerned about where we go from here as a nation.

But instead of politics, I offer this perspective:

Despite all the campaign rhetoric, by all the candidates, the most critical solution to our nation’s woes remains absent – repentance for our national sins to turn away the judgments of a Holy God.

Does the political *ethos of a candidate matter. You bet! There is always the good, the bad, and the ugly, and we need to educate ourselves to know the difference. We may not be electing a “Pastor In Chief”, but it does matter if the Commander In Chief has a spiritual and moral base. What starts at the head flows down to the body. The Bible tells us “righteousness exalts a nation”, and unrighteousness does not.

I lead a racially and culturally diverse church. We don’t bring politics into the pulpit, because Jesus Christ is our unity. I insist on this.

But you better believe I preach the Gospel and a Christian world view. I never try to tell our church who to vote for, or even who I will vote for. They don’t even know my party affiliation, or non-affiliation. I tell them to “vote for Jesus”…the candidate that best embodies the morals, values and ideals of our Judeo-Christian heritage, regardless of party.

Needless to say, someone saying they are a Christian is often much like their campaign promises. Campaign conversions are many. But what does their history say?

Our nation is in trouble. Nearly everyone agrees on this point, regardless of their political persuasion. The empirical evidence is indisputable on nearly every scale we want to measure…moral, financial, debt, military, international, etc.

The evidence that a nation is under a curse is confusion. Whenever the nation of Israel turned away from God, it always went into confusion. This is the curse of disobedience found in Dt. 28. Read the whole chapter for yourself. God offered the Israelites blessing or cursing. He said you choose.

Remember the 40 years in the wilderness wanderings? Confusion. Like Israel, is America now going in circles with no answers? We know this is going on in our nation, and we are all angry about it.

But the angst and outrage people feel over our dilemma must be channeled constructively. Campaign rhetoric and emotional political solutions alone cannot save our nation.

Besides, such things are often not honest. The problem is we want to believe them, and the candidates know that.

We must remember this:

No one is wise enough, strong enough, or smart enough to make America great again without God’s blessing.

So what is the answer? The answer is learning from the Biblical history of Israel, who more than once found themselves in the same predicament we are in today. When they had a godly leader that led them to pray, and repent, and turn to God, they were spared. When they did not, well, you can read about their captivity and bondage yourself.

I believe there is still time for the United States to turn around. There may even be signs of the pendulum reversing on the horizon. But the answer to our national problems is a spiritual one, not just a political one.

I don’t know if we have anyone left running for the office of President that has the moral certitude and courage to lead us in this way. Some of our best choices may have already dropped out.

But even if we do, I don’t know if modern America will elect them.

What is America’s hope? The right candidate? Of course. God uses people. But we must also have God grant repentance to our nation. Without HIM we can do nothing. But with HIM, all things are possible.

The only real hope for America is for God to “heal our land.”

“When I shut up heaven and there is no rain, or command the locusts to devour the land, or send pestilence among My people, if My people who are called by My name will humble themselves, and pray and seek My face, and turn from their wicked ways, then I will hear from heaven, and will forgive their sin and heal their land.“ II Chronicles 7:13-14 NKJV