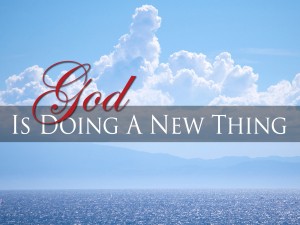 God is doing a “new thing” in His church today, and in your life.

Is 43:18-19 AMP “Do not [earnestly] remember the former things; neither consider the things of old. 19 Behold, I am doing a new thing! Now it springs forth; do you not perceive and know it and will you not give heed to it? I will even make a way in the wilderness and rivers in the desert.”

There is a divine shift happening as we go from present glory to future glory. While there is always a continuous sense of God’s progressive work, I believe there are also times when God does a quick work, and “suddenly” there is a major change over a brief perid of time. Get ready for another “suddenly.” Old things are passing away and the new thing is being revealed.

One analogy from the OT is during the exodus from Egypt when God’s cloud moved by day, and the pillar of fire by night, to lead the Israelites to the promised land.  The provision and protection were in the cloud and pillar of fire. Anyone that did not move with the cloud lost out on what God was doing. It’s time to break camp, for the cloud is moving again.

Another analogy comes from when Jesus taught that new wine must be put into new wineskins, or both will be lost. Many of us have been trying to put new wine into old wineskins (habits, methods, organizational systems, etc.). This is why nothing that man-made-religion builds can sustain the presence of God. God does not dwell in what men build, only in what He builds. Don’t be afraid of new wineskins. They are the only thing that can contain new wine.

Jesus said “I will build My church.”

I remember when the charismatic renewal had to go outside of the traditional church because man-made religion wouldn’t allow it to change their traditions. Millions of people were swept into the kingdom of God and the baptism in the Holy Spirit, who would never have darkened the door of church. They were hungry for Jesus, not our religion or programs.

I remember when the Jesus People Movement became the most powerful and galvinizing force for teens and twentysomethings that this nation has ever seen. The movement had to go outside of the institutional church as the Chuck Smith’s of that day began baptizing them in the ocean, long hair, flower power, and all. Millions of teens answered the call to follow Jesus, not organized religion. I was one of them.

I believe we are at the door of another Great Awakening in America and around the world. Will the church let it in, or will it have to pass us by?

The message never changes, but our methods and mentalities must change. It’s time to drop the fortress mentality, and let God reshape and remold us for a fresh move of God that will bring spiritual water to those outside of the church. “…a way in the wilderness, and rivers in the desert.”

Many of you have been praying for a fresh move of God that is more than just a series of good services. Get ready. God is about to do it again.

Many of you have been faithful through some hard times. I declare to you by the word of the Lord, God will not pass you by or forget your labor of love. You have been in preparation for such a time as this. Your reward is on its way.

Remain willing and obedient. Challenge every habit and tradition and be willing to change what God says has served its purpose and is time to retire. He is streamlining things for a fresh ingathering.

If we won’t let the old things go that need to go, we are worshipping an idol and not God. I have been guilty. I am being changed by the Spirit of the Lord.

Stay in faith for the exeedingly, abundantly, above all you can ask or think. God has made promises to you, and He will fulfil them. He is doing a new thing, and now it springs forth, in Jesus name.